About Tom
In ​March, 2012, the state of Kansas issued a proclamation honoring Mr. Mach for his help in recognizing the 100th anniversary of the 1912 passage of Kansas Suffrage by proclaiming 2012 in honor of his book and officially calling it the “Kansas Angels at Sunset Centennial.”
​
Tom Mach is also a playwright having had one of his plays, Brain Trust, performed at the EMU Theater in Lawrence, and having published recently a comedy play called You're a Real Character. This play, in book form, is available a Barnes & Noble and at Amazon.

His poetry collection, The Uni Verse, won the Nelson Poetry Book Award, while his other collection, The Museum Muse, received high praise from Amazon reviewers.  The last poetry book Mach has written is Poetry Collection, which contains 120 of his poems, including many which have been published. Mr. Mach has written numerous other books as well–including a collection of short stories entitled Stories to Enjoy. [One author claimed his stories had "O. Henry twists" which engaged the reader.] 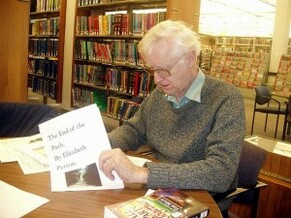 Mach was a former copywriter, editor of two magazines, conducted writing workshops in Ohio, California, and Kansas, and taught writing at KU’s Continuing Education Program. In addition to numerous articles he had authored in national and regional publications, he was past president with the California Writers Club and the Kansas Authors Club.  He won the Jack London Award in California and the prestigious Lifetime Achievement Award with the Kansas Authors Club. He currently resides with his wife in Lawrence, Kansas—where he is also involved in volunteer work to help both adults and children with their writing skills.His work with children included teaching a "Writing as an Adventure"course for the Lawrence Parks & Recreation District, poetry to American Indian children at the Pelathe Community Center, tutoring fourth and fifth graders at a California public school, and helping first graders at St. John's School  write short pieces. He taught an adult writing class for Kansas University's Osher program, held numerous workshops for Kansas Authors Club members, gave a presentation at the Dole Institute in Kansas, and made presentations at book club meetings, church events, and women's organizations.